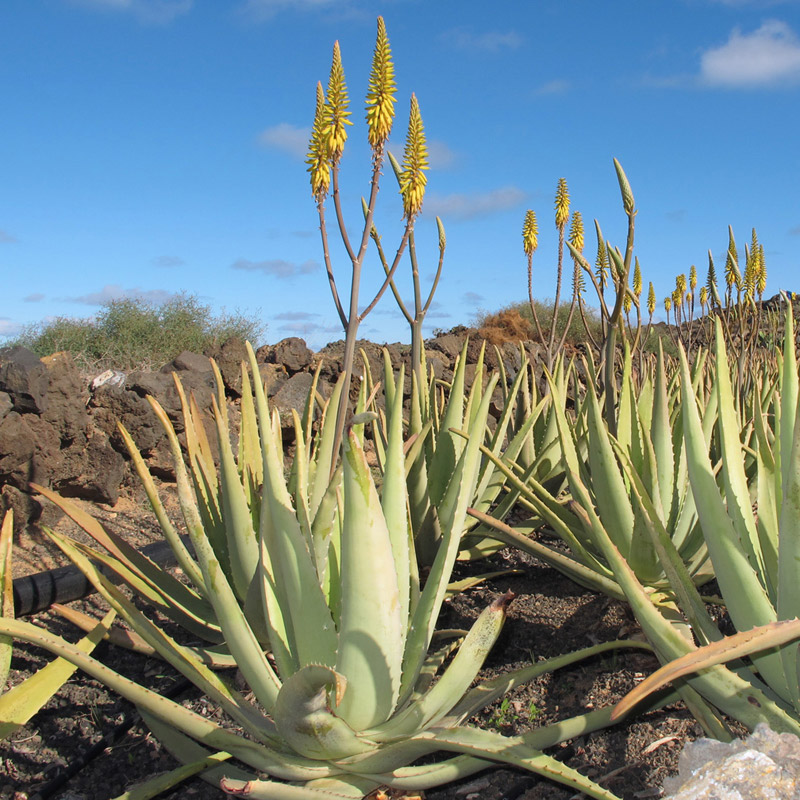 The genus Aloe includes almost 450 species and is mainly found in tropical and subtropical areas of Africa, particularly South Africa, they are also found on the Arabian peninsula in Mediterranean countries, America and Asia. They are stemless or short-stemmed tree-like leaf succulents, which means that they can store water in their leaves, so they are very well adapted to a climate with little or fluctuating levels of rainfall. The large spear-shaped leaves are therefore thick and fleshy. Usually the leaves are arranged in a rosette form, then a very decorative, almost tree-like inflorescence grows from the centre with numerous clusters of large red, yellow or orange flowers on it. The genus name Aloe, from Latin and Greek, is translated as "famous for its bitterness". The bitterness is due to the yellow "aloe juice" that flows from the fleshy leaves when you cut them diagonally at the base of the leaf. 5 to 10g of juice is derived from each leaf. This solidifies when dry and turns into a hard, dark brown, opaque mass, which is known as "Aloe" that is used for medicinal purposes. Two species of Aloe are used to make this drug, the True Aloe (Aloe vera, Syn. aloe barbadensis) and the Cape Aloe (Aloe ferox). The True Aloe probably originated from Sudan and the Arabian peninsula and has now spread in crops and is growing wild in the tropical and subtropical regions of all continents. The epithet barbadensis refers to its presence on the West Indian island of Barbados. Cape Aloe is native to Cape Province in South Africa. The epithet ferox comes from the Latin word meaning "heavily reinforced, wild" and refers to the hard thorns in the leaf centre and on sharp teeth of the leafs edge. The water storing tissue of the leaves of True Aloe is also used. It consists of thin-walled cells, in which the water is held in the form of a mucilage. This slimy parenchyma, referred to as Aloe vera gel is collected by "filleting" the leaves. Initially, the leaf is cut crosswise at the base and the tip and then the gel is cut out like a fillet. The fillets are washed of the residue of the bitter leaf juice and then processed into a naturally cloudy juice. Concentrated juice products are also sold in the form of dry concentrates or even cubed fresh fillets. The Aloe Vera gel products are used both as juice taken internally and for external use incorporated in cosmetics. The aura of a panacea surrounds the popular Aloe Vera gel.

The dry concentrated juice of the leaves is used. The Aloe drug consists of liver-coloured, partly shiny pieces with shell-shaped fracture surfaces.

No listing for traditional medicinal use (§ 109a).

To guarantee the effect and to avoid an overdose, Aloe should only be used in the form of anthranoids (Aloin) standardised prepared medicinal products, the dosage is specified in the package leaflet. It is to be taken at night before bedtime.

Aloe should not be taken for longer than 1 to 2 weeks (skin-irritating laxative), a long-term use increases the constipation. Aloe should not be taken for intestinal obstruction, appendicitis, inflammatory bowel disease (e.g. Crohn's disease, ulcerative colitis), abdominal pain of unknown origin and severe dehydration symptoms. A slight discoloration of the urine during ingestion of aloe may occur.
Although there have been no reports of undesirable or harmful effects in pregnant women with aloe and on the foetus, because of the potential genotoxic properties of various anthranoids, it is advised to avoid taking aloe during pregnancy. The transfer of anthranoids into breast milk cannot be excluded, so even a dose of Aloe when breastfeeding is not recommended. Likewise, children under the age of 12 should not take aloe.

Infrequent stomach cramps and intestinal complaints (reduce dosage!). The prolonged ingestion of Aloe (laxative abuse) can lead to problems with the water and electrolyte balance, especially loss of potassium. Also protein and blood can appear in urine (proteinuria, hematuria). Chronic use leads to (reversible) pigment deposits in the intestinal mucosa.

With chronic use of aloe (laxative abuse), it can with potassium deficiency enhance the effect of digitalis drugs (drugs with cardiac glycosides), also, the effect of antiarrhythmic drugs can be influenced. The simultaneous use of thiazide diuretics, adrenal corticosteroids, and liquorice root can enhance the loss of potassium.