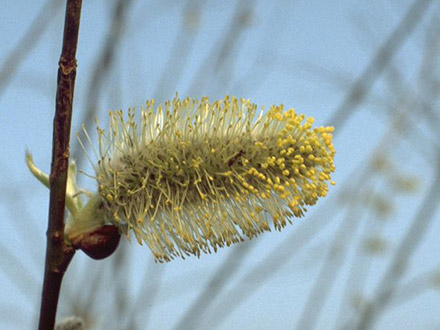 The genus Salix L. (Willow) is represented from the Arctic to the temperate zones in the tropics with approximately 500 species and goes from the sea coast to alpine areas. Approximately 35 species are native to Central Europe, they tolerate constantly wet ground and are therefore often the basic makeup of shoreline bushes and floodplain forests. Some Willows are trimmed as "pollard Willow" every two to three years from the branches and then woven into baskets. Multiple salicylate-rich species are used medicinally, primarily the Purple willow (Salix purpurea L.), Daphne willow (Salix daphnoides Vill.) and Crack willow (Salix fragilis L.). Other willow species can be used as a master plant when its bark satisfies the qualitative requirements for the ingredients (salicylates). Possible partners are the Laurel willow (S. pentandra L.), the Dwarf willow (S. herbacea L.) and the Least willow (S. retusa L.). Willows are 6 to 10m high trees or shrubs with spirally arranged, sometimes silvery, oblong leaves that are usually hairy on the underside and often go black when drying. Willows are dioecious, meaning that the male and female flowers grow on different trees. They blossom in spring, usually before the leaves. The flowers are joined into catkin-like inflorescences. The female catkins are greenish, the male catkins have far more prominent yellow stamens. The nectar of flowering Willow is the first foodsource for bees in spring.

The dried bark of young branches is used in the second or third year. The commercial drug is mainly from Bulgaria, Hungary and Romania.

In febrile diseases, rheumatism and headaches (Commission E); to improve slight back pain and for the symptomatic treatment of mild osteoarthritis and rheumatic complaints (ESCOP). The HMPC has accepted willow bark for the short-term treatment of mild back pain as a "well-established medicinal use", see also "traditional use". The reasoning to use willow bark extract like aspirin, to inhibit agglutination of the platelets (in the vernacular: blood thinners) seems natural because the salicylates of willow bark are chemically similar to acetylsalicylic acid (aspirin). But they lack the acetyl group, which is responsible for the inhibition of thromboxane B2 synthesis and thus responsible for the inhibition of the agglutination. To this extent, willow bark extracts are not a natural alternative to the administration of aspirin, even it was measured as a "blood-thinner" and thus had a cardioprotective effect at high doses in clinical trials. The effect of aspirin was more pronounced.

Willow bark was classified by the HMPC for the following applications as a traditional herbal medicine (§ 39a AMG). Based on many years of experience, willow bark can be used for mild joint pain, in cases of fever associated with colds and headaches. Traditionally used to improve the condition of rheumatic complaints (traditional use acc. to § 109a).

Prepared drugs: To ensure the effect, the Willow bark must be taken in the form of the finished medicinal product with a defined potency (quantified extract), the dosage is specified in the package leaflet. The recommended daily dose in terms of the salicyl alcohol derivatives (salicylates) is 120mg to 240.
Tea infusion: drink a cup of willow bark tea (Rheumatism tea) 3 to 4 times daily; average daily dose for adults: 4 to 12g of the drug.

Mix 2-3 cups of finely chopped or coarsely powdered willow bark with 150ml of cold water, bring the mixture to the boil, remove from heat and strain after 10 minutes.

People with hypersensitivity to salicylates (e.g. aspirin) and other anti-inflammatory drugs as well as those who are prone to allergies should not take willow bark. Patients with asthma, gastrointestinal ulcers and renal or liver function should only use it after consulting a doctor. It is not recommended to use Willow bark during pregnancy and breast-feeding because salicylates penetrate the placenta and enter the breast milk. A doctor should be consulted for use in children and adolescents under 18 years old.

The use of Willow bark has resulted in the occasional stomach discomfort.
Occasionally, hypersensitivity reactions of the skin.

The effect of anticoagulant drugs may increase, the effect of drugs to increase excretion of uric acid may be reduced.