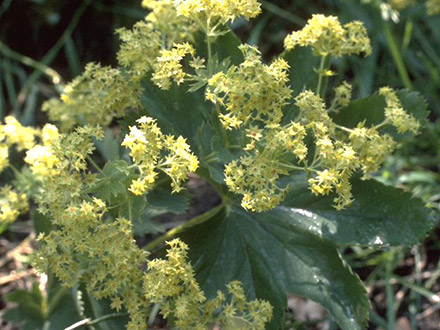 Alchemilla vulgaris is a very diverse group of species with small species that can only be distinguished with difficulty, which is why suffix sl is used (sensu latiore = in the broader sense). The Common Lady's Mantle is widespread throughout the northern hemisphere and in Europe from the Mediterranean to Iceland. It is a 30 to 50cm long half-rosette herbaceous plant, the basal leaves are very characteristic with their rounded, folded blade with 7-9 semicircular flaps. It is reminiscent of a cape as worn by Mary in holy images and since the plant was formerly used in gynaecology, it was named Lady's Mantle. The yellow flowers are very small and are coiled in richly flowering inflorescences. The genus name, Alchemilla (= small alchemist, alchemist herb) probably comes from Arabic (al-Kimiya = chemistry) and refers to the water droplets on the leaf´s edge in the early morning emerging from so-called hydathodes through a process of guttation (often erroneously described as "dew"), which then flow together in a funnel-shaped leaf base to form a large pearl. Alchemists have attributed special healing powers to these droplets.

The dried above ground parts consisting of leaves, flowers and stems collected during flowering time are used. The commercial drug comes from farms in eastern and southern European countries.

The quality of the herb Lady's Mantle (Alchemilla herba) is specified in the European Pharmacopoeia (Ph. Eur).

In combination with other drugs to improve general well-being (traditional use according to § 109a).

Pour 150ml of boiling water over 1 to 2g finely chopped Lady´s Mantle herb and then strain after 10 minutes.

A visit to the doctor is recommended after 3 to 4 days of persistent diarrhoea. Currently there is no experience available for its use during pregnancy and breast-feeding as well as for use in children under 12 years old.