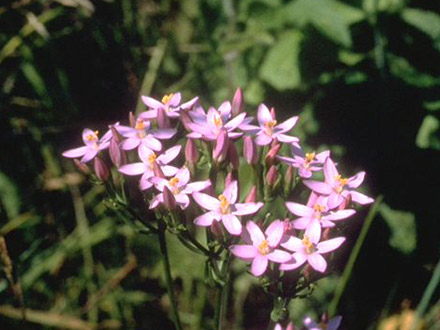 The plant grows, with many regional subspecies, across Europe from the Mediterranean to the British Isles and Scandinavia, in Northern Africa, North America and western Asia. The genus name Centaurium comes from Greek: "kentaureion" (= belonging to the Centaurs). The Centaurs are healing forest and mountain dwellers, at the time of Homer they were still without the part of a horse, this was attached to them later. The epithet erythraea (from the Latin "erythraeus" = reddish) refers to the colour of the pink flowers. The English name refers simultaneously to the gold that could hardly be paid for the value of medicinal plants, whereby "aurei centum" (Latin) means one hundred pieces of gold. Therefore, the plant was first called the Hundred Guilder herb, then later translated in exaggeration as the Thousand Guilder herb. The two-year plant is about 30 inches high and in the first year has a basal rosette of leaves with elliptic to spatulate leaves. In the second year the branched flower stalks grow with small, stalk-leaves. At the end it has pink, tubular flowers in 5-uneven flowery cymes. The fruits are oblong 2-fold dehiscent capsules with many tiny seeds. Flowering time is July to September.

The aerial parts of the flowering plants consisting of stems, leaves and flowers are used plus a few capsules. The drug is imported from Morocco, the former Yugoslavia, Bulgaria and Hungary.

The quality of centaury (Centaurii herba) is specified in the European Pharmacopoeia (Ph. Eur).

For loss of appetite and indigestion with mild cramps in the stomach-intestinal tract (dyspepsia) (Commission E, ESCOP). The HMPC has classified centaury as a traditional herbal medicinal product (see "traditional use").

Centaury has been categorised by the HMPC as a traditional herbal medicine (§ 39a AMG). Based on many years of experience centaury can be used for dyspeptic complaints and temporary loss of appetite. Traditionally used to support the digestive function and to stimulate the appetite (traditional use acc. to § 109a).

Prepared drugs: see package insert;
Tea infusion: drink a cup of warm of centaury tea several times a day. Combined with other drugs such as wormwood and yarrow (teas for the stomach). To stimulate the appetite stimulation take the infusion half an hour before meals, drink for indigestion after meals. Average daily dose: 6g of the drug.

2 to 3g of finely chopped centaury are covered with boiling water and strained after 10 to 15 minutes.

Centaury should not be taken if the person has existing stomach ulcers. It is not recommended to ingest centaury during pregnancy and breast-feeding because there is as yet no experience on its safety. Also there are no findings for its use in children and adolescents under 18 years old.