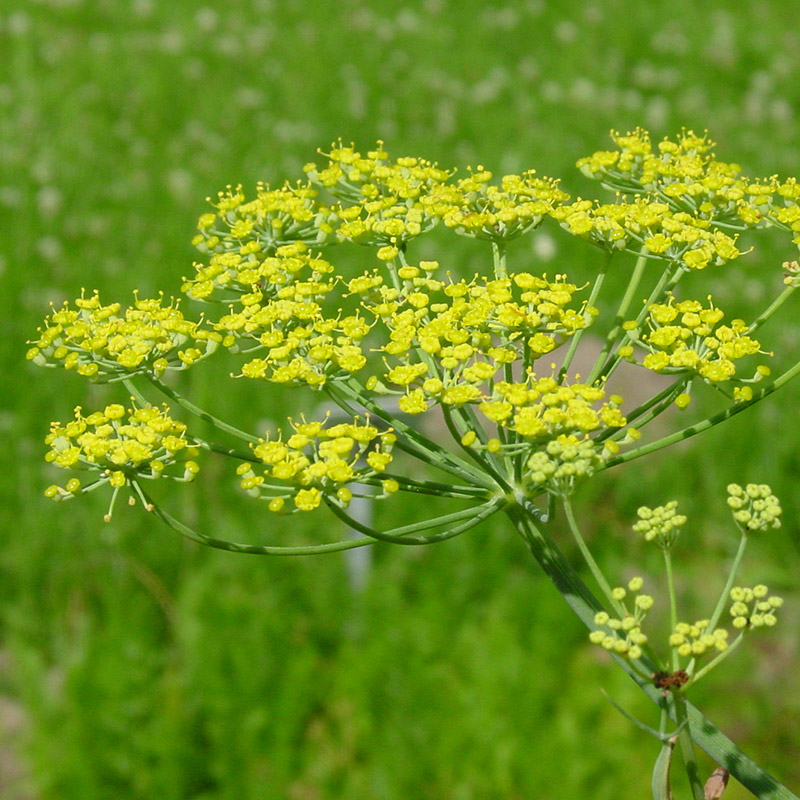 The common fennel (Foeniculum vulgare Mill) is native to the Mediterranean and it comes in two varieties. The subspecies piperitum (Pepper or Bulgarian fennel or donkey) grows wild on dry, rocky soils, the subspecies vulgare (Garden fennel) is mostly in a two-year-old farmed form that is cultivated throughout Europe and other temperate zones and is also found wild. Three variants of this have developed over time: var vulgare, the Bitter fennel, with its bitter-sweet and slightly pungent fruit; var dulce, the Sweet or Roman Fennel with pleasant sweet-tasting fruits, var. azoricum is the vegetable and onion-fennel, the leaf sheaths at the base of the stem are fleshy and are popular as a vegetable. The Latin genus name Foeniculum comes from the Latin "fenum" = hay, which is used here in the diminutive form. The blue-green, bluish frosted plant grows up to 120cm and blooms in July / August with numerous small golden yellow flowers, 12 to 25 are arranged in the double-rayed umbels. The aromatic leaves are scented with conspicuous leaf sheaths in a pithy stem. They are 3 to 4 times pinnate with very narrow, almost thread-like leaves. When ripe they are greenish-brown fruits 3 to 12mm long with 5 light, angular protruding ribs. Like all Umbelliferae it has "double achenes" which easily disintegrate even before they come apart into the two fruits (achenes).

The ripe fruit, with its typical smell of fennel, which is clearly notable when rubbed, is created by the essential oil contained in the fruit. The commercially available drug comes from imports from China, Egypt, Bulgaria, Hungary and Romania.

Fennel fruits contain an essential oil ("Bitter fennel oil") with sweet-tasting trans-anethole (main component) and the bitter fenchone that gives the Bitter fennel its slightly bitter taste. The essential oil of Sweet fennel (var. dulce) contains significantly less fenchone, so the flavour of the fruit is dominated by the sweet trans-anethole. The fennel fruit also contains a fatty oil.

Internally for dyspeptic complaints such as mild, spasmodic gastric-intestinal complaints, bloating, flatulence, internally and externally for catarrhs of the respiratory tract (Commission E, ESCOP). The HMPC has classified fennel and fennel oil as traditional herbal medicinal products (see "traditional use").

The HMPC has classified fennel as a traditional herbal medicine (§ 39a AMG). Based on many years of experience, fennel can be used for mild spasms and cramps in the stomach-intestinal tract (flatulence) and light menstrual cramps as well as a decongestant in coughs associated with a cold. Traditionally used to support the digestive function and to stimulate the appetite (traditional use according to § 109a).

Often combined with other similarly acting drugs. Savoury preparations such as fennel syrup and fennel honey can be used for colds, especially with children.

Pour 1 litre of hot (not boiling!) water over 1 heaped teaspoon (1.5 - 2.5g) of freshly chopped fennel, let it stand for 15 minutes then strain. To enhance the effectiveness, the fennel should be crushed or coarsely powdered before the tea is prepared so that the essential oil can get into the tea.

Fennel preparations must be avoided in cases where there is an existing allergy to Apiaceae (fennel, caraway, celery, cilantro or dill) or to anethole. There is currently no experience on the harmlessness of the use of fennel during pregnancy, breast-feeding or in children under the age of 4. As a precautionary measure, children and adolescents under the age of 18 should not take the essential oil (bitter fennel oil), and children under the age of 4 should also not take the fennel fruit because of missing data and because of the estragole content.
Fennel oil should not be applied for longer than 2 weeks because of the levels of trans-anethole and estragole. This advice is based on the finding that "Photoanethol" with estrogenic properties could form from anethole during exposure to light during storage. Furthermore, in animal studies (mice) over 12 months with pure estragole (methyl chavicol) liver tumours could be observed. These results cannot however be transferred to the administration of fennel fruit and fennel oil.

Occasionally, allergies to the skin and respiratory tracts