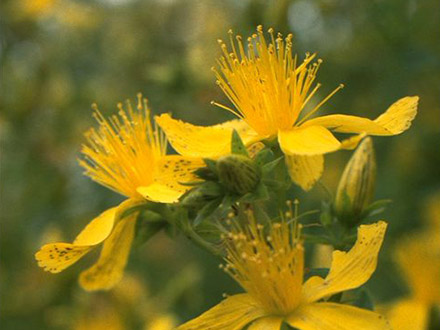 There are about 380 species of hypericum worldwide, about 20 of them are found in Central Europe, including St. John´s wort. It is native throughout Europe and western Asia, the Canary Islands and in North Africa and has been introduced and naturalised in other continents. The genus name hypericum is derived from Greek "hyper" (= on) and "ereikon" (sense: growing on the heath). There are various interpretations such as "under heather growing taxon" or "the heather like taxon". The epithet perforatum is clear and refers to the translucent stippling of the leaves, derived from Latin "perforatus" (= pierced, perforated). Particularly striking is the glandular puncturing if you look at the leaves against the light. The glandular dotting differentiates St. John´s wort from other hypericum species. The plant is called "St. John's wort", it begins to bloom for the summer solstice, then to "Midsummer" (June 24). St. John's wort grows in paths and field borders, along fences, on meadows and in thickets. St. John´s wort is about 60cm high. The numerous yellow flowers that are in the compound racemose cymes at the top of the hard, branched stems are very striking. Numerous long stamens protrude out from the centre of the flower. The petals are like the leaves glandular-dotted, and the glandular oil reservoir of the flowers appear black because of the dark red hypericin they contain. If one crushes the fresh flowers, it stains the fingers red. St. John's wort blossoms from the end of June to late summer.

The dried flowering branch tips with flowers, leaves and stems are used. The drug comes mainly from cultivation in Germany, Eastern Europe and Chile.

When people talk about "oil preparations" of St. John's wort, they are referring to the St. John's oil (red oil). It is a traditional preparation of fresh flowers with a St. John's production provision in the book supplement DAB 6 (Supp.-B. 6). The fresh flowers are crushed with olive oil (1:4) and poured in a clear glass container, it is shaken frequent over six weeks, kept in a warm sunny spot and extracted (the original text specifies "fermentation") until the oil is dark red in colour. The hypericin gives it its colours.

St. John's wort was classified by the HMPC for subsequent applications as a traditional herbal medicine (§ 39a AMG). Based on many years of experience St. John's wort can be taken internally to alleviate temporary mental fatigue and for the symptomatic treatment of mild gastrointestinal complaints. In addition, St; John´s wort preparations (locust oil) are used externally to treat minor skin infections (e.g. sunburn) and to heal small wounds.

Prepared drugs: see package insert;
Tea infusion: A tea made from St. John's wort does not provide the effective dose for the treatment of depression, therefore, its ingestion is discouraged in this area of use in preference for preparations with a defined potency (quantified extract).
In the application areas of "traditional use" St. John's wort can also be drunk. Single dose of 2-4g of St. John's wort, daily dose: 6 to 12g.

St. John's wort has photosensitising properties (hypericin content). Therefore fair-skinned people with a high-dose of hypericum may react with increased sensitivity to light and should therefore not be exposed to the sun.
The intake of St. John's wort during pregnancy and whilst breast-feeding is not recommended, because there is as yet no experience on its safety. Also there are no findings for its use in children and adolescents under 18 years old.

St. John's wort increases the activity of different subtypes of the enzyme cytochrome P450, leading to interactions with drugs that are metabolised by this enzyme, resulting in a weakening effect. This applies to anticoagulants of the coumarin type (e.g. Marcurmar), cyclosporine and tacrolimus (Immunssuppressiva), digoxin, indinavir and other protease inhibitors (HIV treatment), cytotoxics, hormones for contraception (pill) and Amitryptin/nortriptyline (antidepressants) and theophylline.