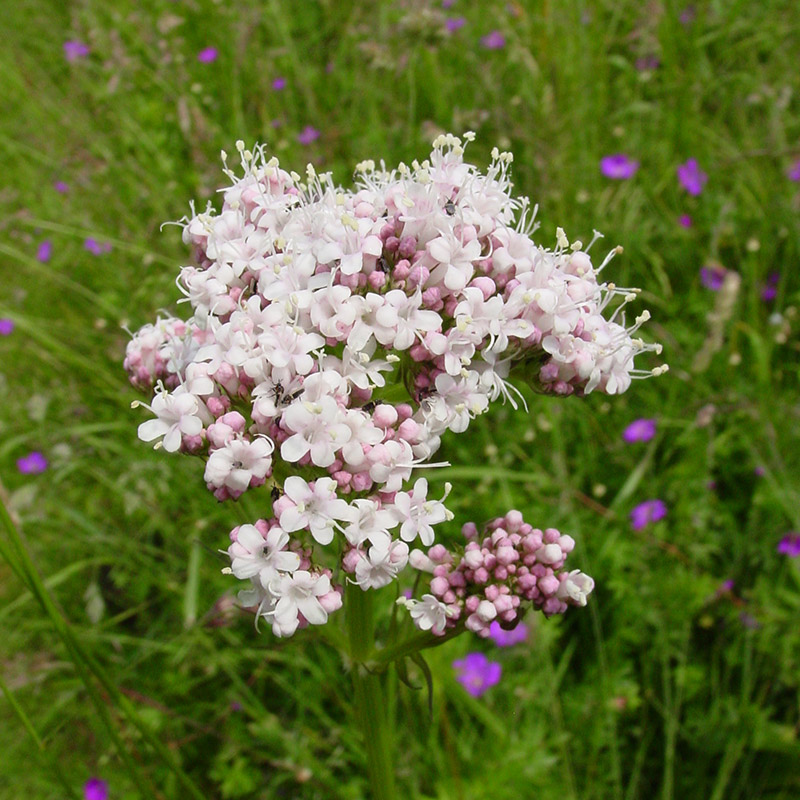 Valerian is native to Europe and the temperate zones of Asia and grows preferably in moist and shady locations. It is a multiform collective species, characterised by the suffix "sl" (sensu latiore = in the broad sense) of the Latin names of plants (Valeriana officinalis sl). The genus name is probably derived from Valeriana of the Latin 'valere' (= to be healthy) because of the healing effect of the plant. The epithet officinalis infers that it is an old medicinal plant, because the "officina" is the sales room of a pharmacy and officinalis means: used in the pharmacies.
Valerian is a perennial, it grows 50 to 100cm tall and blossoms from July to September with numerous small pale pink to white flowers, which are arranged like umbels. The leaves are in pinnate pairs, and are both basal and in pinnate pairs on the stem.

The underground parts of plants are used, consisting of the short, cylindrical rhizome and the tufty, slender roots attached to it. The typical scent of the drug is released when it is dried, which is caused by isovaleric acid. The commercially available drug is collected in the wild and from farms in Europe.

Restlessness, sleeping disorders caused by nervousness (Commission E, ESCOP).
The HMPC has accepted valerian root for use to improve slight sleeping disorders and nervous complaints as "well-established medicinal use" (see also "traditional use").

Valerian root has been classified by the HMPC for the subsequent applications as a traditional herbal medicine (§ 39a AMG). Based on many years of experience, valerian root can be used to treat mild stress-related symptoms and as a sleep aid (see also "recognised medical use"). Traditionally used to relieve nervous stress of the person suffering (traditional use according to § 109a).

Pour 150ml of boiling water over 1 to 2 teaspoons (2-3 grams) chopped valerian root and let it stand covered. Strain after 10 to 15 minutes.

Because valerian may affect the reactive capacity of a person, one should take the precaution of not driving until two hours after the ingestion of a drug with valerian. In valerian preparations must be avoided in any form with known allergies to valerian.
Do not use valerian during pregnancy, breast-feeding or in children under the age of 12 without talking to the doctor because there is no experience regarding its harmless as yet.

At most, mild gastrointestinal complaints.