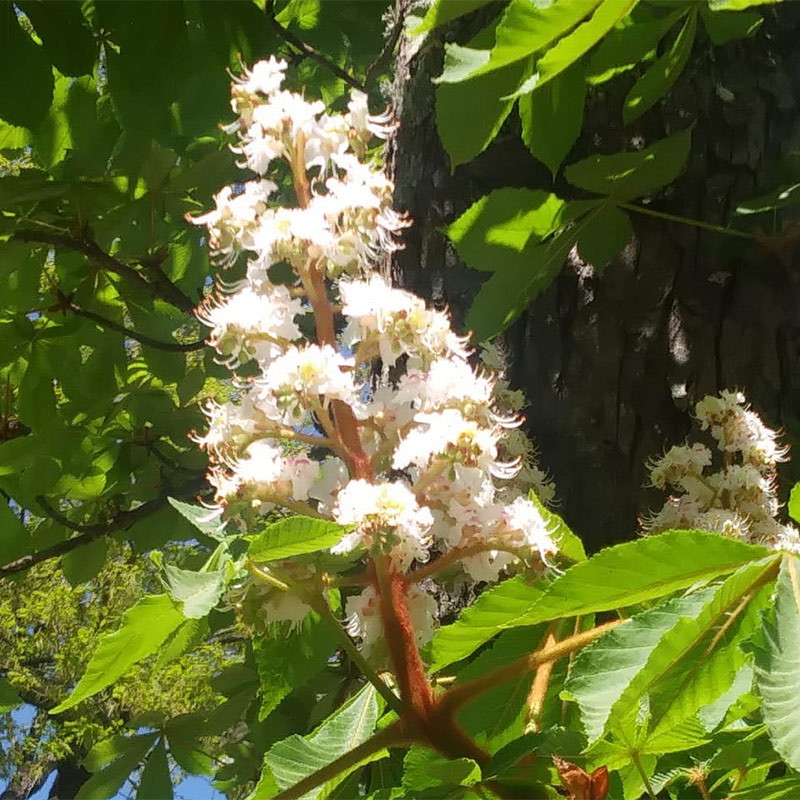 The horse chestnut is a deciduous tree, it probably came to Central Europe from Turkey at the end of the 16th century, as a part of horse feed. Today it of great importance in Europe as an avenue and park tree, but also grows wild from farming. "Aesculus" (Latin) is described as "a kind of oak of lofty stature and solid wood sacred to Jupiter, growing on mountains." The epithet hippocastananum comes from Greek 'hippos' (= horse) and "kastanon" (= chestnut) and clearly confirms that the seeds were used as horse feed, it is also said to have been used in horses as a remedy for coughs. The horse chestnut grows up to 30m high and bears the very characteristic 5 - 7-fingered, large leaves. The white to pink flowers are in large, upright clusters like lit candles at the end of the branches. Flowering time is April - May. In the autumn, the green and prickly fruits fall from the trees. They break up and each one releases 2 to 3 large, shiny, brown seeds, which are often collected by children, referred to as "conkers".

The dried seeds are used. The drug is imported from Eastern European countries.

The quality of the following drugs or drug preparations is specified in the German Pharmacopoeia (DAB):

Horse chestnut seeds were rated by the HMPC for external use as a traditional herbal medicine (§ 39a AMG). Based on many years of experience, ointments and gels with horse chestnut seed extract as an active ingredient can be applied to relieve the discomfort associated with mild venous disorders and the treatment of local swelling and bruising (see also "Recognised medical use").

To ensure the effect, horse chestnut seeds should only be used in the form of finished medicinal products standardised on eosin, the dosage is stated in the leaflet.

Horse chestnut preparations should be avoided in any form if the person has an existing allergy to horse chestnut. Do not use without consulting a doctor during pregnancy and breast-feeding since there is as yet no experience on its safety. The clinical symptoms are not relevant in children and adolescents.