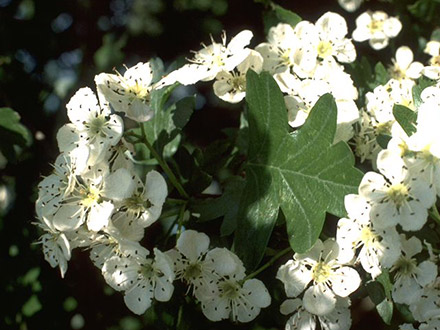 The genus Crataegus is a large genus whose systematic classification is very difficult because the types are very easily bastardised. 150 to 2000 species can be described, depending on classification, of which only 100 to 200 can be called a true species. The Common hawthorn is native to southern and northern Europe, Russia, Siberia, the Himalayas, North Africa, Chile and China, the Midland hawthorn is found throughout Europe and is farmed in America. Both species grow as hawthorn shrubs in deciduous forests, bushes, hedges, along fences and in gardens and parks. "Hawthorn" refers to the white flowers and spiny branches of this large shrubs. They are in full bloom from May to June - the Common hawthorn two weeks before the Midland hawthorn - and then they adorn our landscape with their white flowers. The two species differ, as expressed in the epithets. But a better way to distinguish them is by the shape of the leaf. The leaves of the Common hawthorn are cut deeper than that of the Midland hawthorn, whose leaves are diamond shaped and sawed. The small white flowers grow in clusters and after fertilisation they ripen on both species into small, bright red drupes, which make the shrubs looks very decorative in the autumn.

The dried flower-bearing twigs and dried berries are used. The commercial drug comes from various Eastern and Southern European countries.

According to the pharmacopoeia hawthorn leaves with flowers and the hawthorn fruits even from hybrids from the Common hawthorn and Midland hawthorn can be used. Also the C. pentagyna Waldst. Et Kit., C. nigra Waldst. Et Kit. and C. azarolus L. are, according to Pharmacopoeia, approved as a root plant of the drug.
The quality of the following drugs or drug preparations is specified in the German pharmaceutical Codex (DAC):

Hawthorn leaf with flowers
Declining performance of the heart (heart failure) corresponding with stage II according to the NYHA (New York Heart Association) (Commission E, ESCOP).
The effectiveness is proven by clinical studies (approved). ESCOP recognises this area of use but only for finished pharmaceuticals with alcoholic extracts as the active ingredients; for tea preparations is the area of use is: "nervous heart complaints and support of the heart and circulatory function."

Hawthorn leaves with flowers: No listing as a traditional use (§ 109a)
Hawthorn berries: Traditionally used to support cardiovascular function (traditional use acc. to § 109a).

Pour 150ml of boiling water over 1.0 to 1.5g of finely chopped leaves of hawthorn blossoms and then strain after 15 minutes. Hawthorn berries are not suitable for the preparation of a tea infusion.

There are still no studies on the safety of using hawthorn leaf with flower and hawthorn berries during pregnancy and breast-feeding as well as for use in children under 12 years old. Therefore, its ingestion is recommended only if clearly indicated by the doctor.