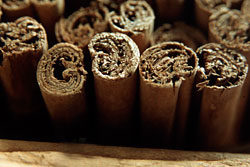 The cinnamon tree is native to Sri Lanka (formerly Ceylon) and India and is widely cultivated in the tropics, especially in Indonesia, Sri Lanka, Seychelles and Madagascar. The cinnamon is a very old and already in ancient Egypt, Rome and the Middle East it was also a popular spice. It comes from the thinner branches of 6 to 12m tall, evergreen trees. The trees that are farmed are kept short like wicker baskets to make the stem portion high. The leathery leaves of the tree are oval and grow opposite each other on the branches and smell of cloves. The small white flowers form acorn-like fruits.

The bark freed from the cork and the underlying layers. The bark is removed from the stalks with a knife and wrapped around logs. Then the cork layer is removed with a sharp knife along with a part of the outer bark. The remaining ethereal oil-rich inner layer of bark rolls itself up. 8-10 pieces of bark are then stuck together and dried in the shade.

Loss of appetite, dyspeptic complaints such as mild cramps in the stomach area, for bloating and flatulence (Commission E, ESCOP). The lowering effect on the blood sugar of aqueous extracts of the cinnamon bark powder or cinnamon is under discussion. In animal studies with mice, a sort of anti-diabetic effect could be demonstrated in clinical studies with diabetic patients, the data however are not convincing. The previous findings are insufficient to recommend use to lower the level of blood sugar in diabetics. Despite this situation, the corresponding preparations are sold commercially, but have no drug status. Such preparations can be used as dietary supplemental mellitus for diabetes, a dose reduction of oral antidiabetic drugs prescribed by doctors should be done only after consultation with the attending doctor.

Traditionally used for the digestive function or to improve your condition if you feel unwell (traditional use acc. to § 109a).

Cinnamon bark is included in many finished drugs as a flavouring.

Prepared drugs: see package insert;
Tea infusion with dyspeptic complaints and to stimulate the appetite in mixtures with other drugs: 2 to 4g daily dose of cinnamon bark, essential oil of cinnamon: daily dose 0.02 to 0.2g.

Not common, possibly as a tea blend with other drugs, just as a flavouring

Ceylon cinnamon must not be confused with "Chinese cinnamon" (cassia bark - Cinnamomum aromaticum Nees), because it contains liver-toxic coumarin. People who suffer from hypersensitivity to cinnamon, Tolu or Peru balsam, or have stomach and intestinal ulcers or are pregnant should not take cinnamon.

Often allergic skin or mucosal reactions, caused by cinnamaldehyde, the main ingredient of the essential oil. If cinnamon bark is taken in larger amounts, it can lead to tachycardia, increased breathing and peristalsis accompanied by sweating. This is followed by a period of drowsiness.