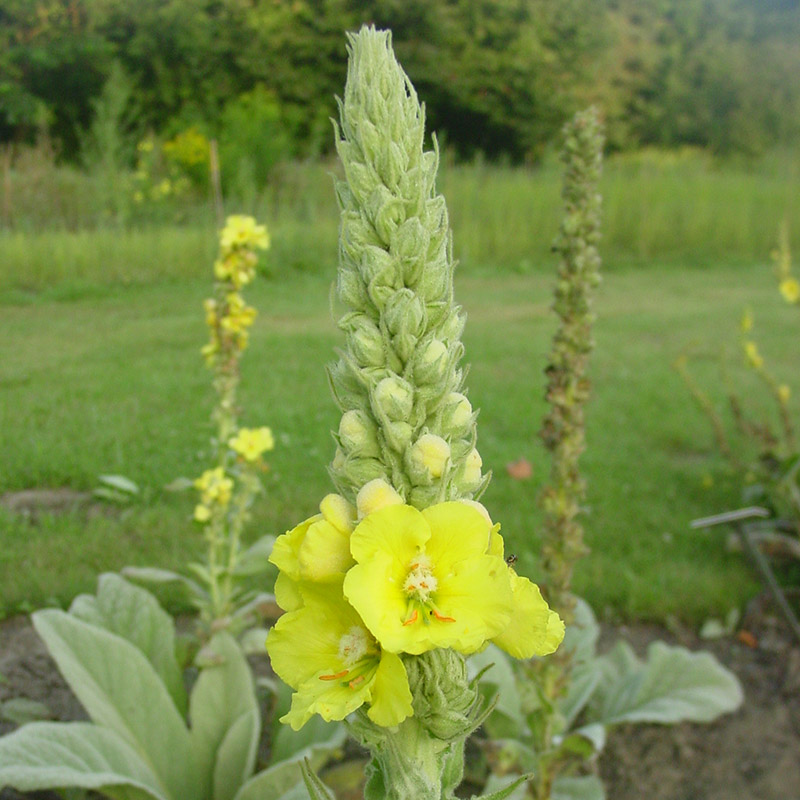 Mullein is widespread in central and southern Europe, in Asia Minor, Morocco and many other places in the temperate zone. The genus name, Verbascum has been translated into English (Latin for 'Verbascum' = mullein). There are also indications that previously dried stems soaked with resin or wax soaked were used as candles or torches. With its abundant blossoms in golden yellow and looking like a large candle with its high stem the plant gives great honour to its name. A distinction is made between different types, and the Dense-flowered mullein is characterised by its height of up to 2m and flowers up to 5cm in diameter. The various epithets describe the features, such as Latin here "densiflorum" = densely flowered. The leaves are in a basal rosette and are arranged opposite each other on the stem and hairy like felt. The yellow flowers are slightly asymmetric and grow in clusters of 2-5 on a long tufted spear. Their petals grow together at the bottom, the upper 2 are somewhat smaller than the lower 3, outer hairy with fine wool. The 3 short-stalked stamens are conspicuously hairy, the two long-stalked stamens are leafless. Flowering time is July to September.

The corolla, dried petals on it with the five stamens are used. The fine hairs of the petals and the three short haired stalked stamens give the dried flower a "woolly" appearance, which is why the drug is also known as "wool flowers." The commercial drug is mostly from farms in Egypt, Bulgaria and the Czech Republic.

With catarrh of the respiratory tract (Commission E). The HMPC has classified mullein flowers as a traditional herbal medicinal product (see "traditional use").

Mullein flowers were classified by the HMPC as traditional herbal medicines (§ 39a AMG). Based on many years of experience mullein flowers can be used for the relief of sore throat symptoms associated with dry cough and colds.
Traditionally used in combination with other drugs to help the mucus in the respiratory tract (traditional use in accordance with § 109a).

Finished medicinal preparations made with mulleinflowers are not available.

Tea infusion: drink a warm cup of tea made from mullein flowers 3 to 4 times a day.

Pour around 150ml of boiling water over 1.5 to 2 grams of finely chopped mullein flowers (mullein) strain after 10 to 15 minutes. To make better use of the mucus of the drug prepare the infusion in cold water, strain after 2 hours and bring briefly to a boil.

There is currently no experience on the safety of using mullein flowers during pregnancy and whilst breast-feeding. Its use for coughs in children under 12 years old is not recommended, it should be dealt with by a doctor.