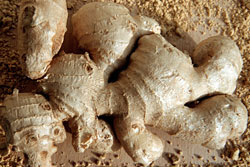 Ginger is native to Southeast Asia and is now cultivated in many areas of the tropical belt. The spice came to Europe via Arab traders. In the 13th century the plant was brought by the Arabs in East Africa and in the 16th century by the Portuguese to West Africa. Ginger is a perennial herb, which is vegetatively propagated with its rhizomes (underground stems). From the tuberous rhizome sections of sterile, reed-like stem grow up to 1m long, which are covered by the sheaths of the 20cm long, linear-lanceolate leaves. Some shorter shoots bear inflorescences with terminal yellow flowers that have a purple lip.
The generic name Zingiber is a Sanskrit word "sringavera" = "with antlers", so the rhizome is described quite well. From the species name officinalis one can conclude that it is an old medicinal plant because the "officina" is the sales room of a pharmacy "officinalis" means it was used in pharmacies.

The tuberous rhizome (rootstock) is used, the adherent threadlike roots are cut off. The rhizome should be cleaned and freed from the outer layer of cork, then dried in the sun.

Internally for dyspeptic symptoms (diffuse abdominal pain), loss of appetite and to help fight the symptoms of travel sickness and as a postoperative antiemetic (Commission E, ESCOP).

Traditionally used to support the digestive system and to ease discomfort (traditional application acc. to Â§ 109a).

Prepared drugs: see package insert;
Tea infusion with dyspeptic complaints and to stimulate the appetite: 0.5 to 1g of ginger several times a day. To prevent travel sickness: Adults and children over 6 years old should take 0.5 to 2g of powdered ginger 30 minutes before departure.

Pour 150ml of boiling water over 0.5 to 1g of powdered or coarsely chopped ginger, let it stand covered 5 minutes, then strain through a sieve.

Only use ginger and ginger preparations for bilious complaints after consultation with the doctor. Do not use for morning sickness.