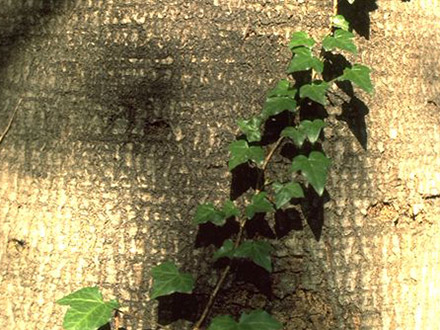 The evergreen ivy is native to Europe and grows as a vine on trees and shrubs in forests and parks. In the big city as in the villages it covers walls and shady corners. Ivy is easy to recognise through its characteristically shaped leaves. It is present in numerous farmed and garden forms. The genus Hedera name probably comes from the Greek hedra (sitting), referring to the adhesion of the plant to the walls and trees. The epithet helix, from Greek helix (= spiral), describes the winding of the ivy around trees. Thanks to its roots, it can establish itself firmly on the surface. The word ivy comes from Old English word: ifig.
Ivy is a creeping or climbing, very woody and branched plant. It clings to its support with adventitious roots. The leaves of the non-flowering shoots characteristically have 3 to 5 lobes with a heart-shaped base, they are leathery and dark green, glossy, often with lighter venation. The leaves on the flowering shoots are rhombic to lanceolate and tapered at the end. The brown flowers are inconspicuous and are in semi-globular clusters, like grapes. Flowering time is September / October. The following year, the fruits ripen. The blue-black berries are then in decorative, spherical umbels. They go well in flower bouquets and flower arrangements. Caution: the berries can cause cases of poisoning to children!

The dried leaves harvested in spring are used. The drug is imported from Eastern European countries.

The quality of ivy (Hedera folium) is specified in the European Pharmacopoeia (Ph. Eur).

For catarrh in the respiratory tract; symptomatic treatment of chronic inflammatory bronchial diseases (Commission E); ESCOP has added: coughs, especially if this is accompanied by an excessive secretion of viscous mucus.
A documented area of use from clinical data (approval) as follows: for the relief of symptoms associated with chronic inflammatory bronchial diseases, colds and the respiratory tract (see also "Traditional use").
The HMPC has accepted the internal use of ivy as an expectorant for productive coughs as "well-established medicinal use".

Ivy leaves were classified as a traditional herbal medicinal product by the HMPC for the following areas of use (§ 39a AMG). Based on many years of experience, ivy leaves can be used as an expectorant in connection with a cold (see also "recognised medical use").
Ivy leaves are traditionally used to help release the mucus in the respiratory tract (traditional use according to § 109a).

There are no studies on the harmlessness of the use of ivy leaves during pregnancy and breast-feeding. Ivy leaves should not be used with children under 2 years old, as it may worsen the respiratory symptoms, medical advice should be sought for use in children aged between 2 and 4 years. Similarly, seek medical advice with shortness of breath, fever or purulent sputum. A simultaneous administration of antitussives (cough medicines) such as codeine or dextromethorphan should only be done under medical supervision.