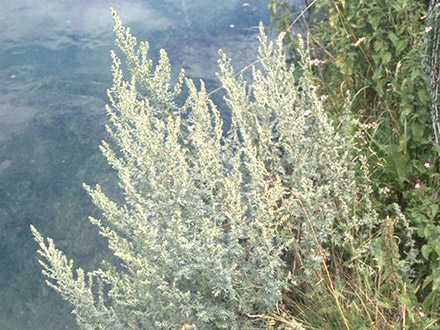 Wormwood is originally native to Asia, Europe and North Africa, and now widespread in North and South America. The genus name Artemisia reflects the name of the Greek goddess Artemis, the protectress of mothers in childbirth. The epithet "absinthium" comprises the Greek "apsinthion" (= wormwood). It is unsure, however, whether this term came from the Greek "a" (= no) and "psinthos" (= pleasure), which would be entirely justified, because the leaves are very bitter. It also remains open whether the name "wormwood" is made from "warm" or "worm" as its use as a vermifuge is in the name. The shrub of up to 1m high bears very characteristic 2 - to 3-fold pinnatipartite leaves with very narrow leaflets, densely hairy on both sides with white-silky hairs. The small, globular yellow flower heads are arranged in panicles. Flowering time is July to September. When rubbed, the herb releases a very aromatic scent through the essential oil it contains.

Wormwood contains a volatile oil with thujone and many other monoterpenes, sesquiterpene lactone type of bitters, flavonoids and phenolic acids.

Loss of appetite and dyspeptic complaints (indigestion with mild cramps in the stomach-intestinal tract) (Commission E, ESCOP).
The HMPC has classified wormwood herb as a traditional herbal medicinal products (§ 39a AMG) (see "traditional use").

The HMPC has categorised wormwood herb as a traditional herbal medicinal product (§ 39a AMG). Based on years of experience, Wormwood can be used for the treatment of temporary loss of appetite and to treat dyspeptic and gastrointestinal disorders. Alone or in combination with other drugs it is traditionally used to support the gastrointestinal function (traditional use acc. to § 109a).

Wormwood preparations should be avoided by people who have existing allergies to Compositae (Asteraceae). Patients with gallstones and other biliary disorders should seek the advice of a doctor before taking it. Its administration is not recommended, during pregnancy and breast-feeding because there are as yet no studies on its safety. This also applies to its use in children and adolescents.
Alcoholic wormwood extracts and solutions of the essential oil in alcohol (absinthe liquors, "Green Fairy", etc.) were prohibited in many states (in particular when used continuously) due to toxicity (gastrointestinal problems, neurotoxic effects, mental illness - even suicide). Thujone, the drug contained in it, is responsible for convulsions in the event of an overdose. Today absinthe drinks are allowed again, but with upper limits for thujone (no more than 35mg per litre). A low-thujone Artemisia species is used for this manufacture.