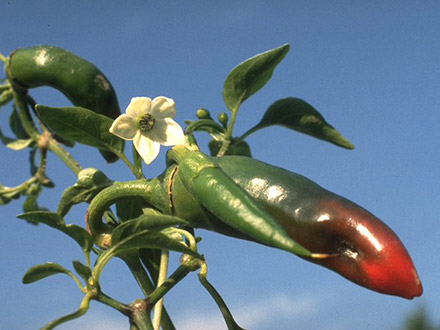 The cayenne pepper - the name of the plant and the paprika-like red fruits harvested from it - is native to tropical South and Central America and it is now farmed in the entire tropical belt of the earth. It is a perennial, bushy shrub, 0.5 to 1m high, with oval to oval-lanceolate leaves. The flowers are an off white, the fruits are bright red and shiny and have the typical shape of a pointed cone-shaped pepper - much smaller and less fleshy than our sweet peppers. Botanically it is a berry with large, hollow chambers divided by false partitions, so that it resembles a "capsule", which is expressed in the Capsicum genus name (Latin, capsa = capsule). The white, round seeds are attached to the internal partitions.
Both the fruit and the seeds are characterised by a hot burning flavour, hence the name "pepper", which is attributable to the content of capsaicinoids. The fruit of cayenne pepper is therefore used as a strong spice and is the basis for numerous spicy sauces such as Tabasco (Mexico), Sambal Olek (Indonesia) and the red chili sauce in Chinese cuisine. Selective breeding and hybridising has created a bewildering array of varieties in size, shape, colour and piquancy. This is why there is the addition of "sl" (sensu latiore = in the broader sense) after the botanical name of the plant. The small fruit varieties of C. frutescens and C. annuum L. var. minimum (mil) Heiser are used for pharmaceutical purposes.

The dried, ripe fruit is used. They are imported mainly to Europe from the tropical countries of Africa.

The quality of the following drugs or drug preparations is specified in the German Drug Codex (DAC):

Cayenne pepper is only used externally. Commission E mentions an area of use with "painful muscle tension in the shoulder and arm area and the spine (adults and school children)". ESCOP identifies the following as areas of application: for relief of muscle pain, e.g. back pain, and for the treatment of pain associated with degenerative joint disease (OA) and rheumatoid arthritis, furthermore to treat nerve pain, which can occur as a result of shingles or in painful diabetic neuropathy, in addition against the itchiness caused by various ailments, e.g. in connection with psoriasis or blood dialysis and in contact with water. These applications are also documented through clinical studies.

Cayenne pepper has no listing as traditional medicinal use (§ 109a).

Prepared drugs: see package insert;
Tea infusion: Because cayenne pepper is used externally only, it is not used as a tea infusion.

Cayenne pepper preparations may not be applied to damaged skin or mucous membranes. Contact with eyes must be avoided and hands must be washed carefully with soap after the application of cayenne preparations. If possible, wear gloves when applying.
There is still no experience on the harmlessness of cayenne pepper for use during pregnancy and breast-feeding. Do not use cayenne pepper with children under the age of 12.

When using cayenne pepper for treatment there are different signs of the effect: burning, heat generation and an inflammatory redness of the skin, which disappears after the treatment. These side effects usually diminish with frequent use.

Cayenne pepper preparations should not be used in combination with other medicines for external application.