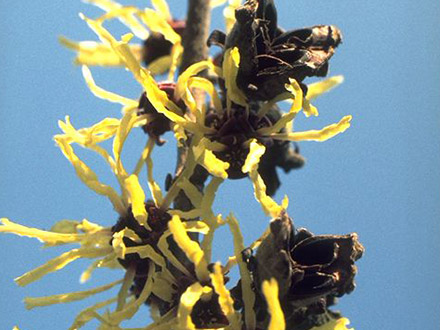 Witch hazel is native to East Asia and the Atlantic States of the American continent and it grows there as a large shrub in thickets and forest edges from southern Canada to Texas and northern Florida, west to Wisconsin in deciduous forests to Nebraska and Missouri. In 1736, Hamamelis was introduced to England under the name "witch hazel" and has been very popular in Central Europe as a hardy shrub in gardens and parks. As a winter bloomer it adds a little colour to the gardens in December / January with its yellow flowers. Hamamelis is very similar to our hazel leaves, but their leaves are strikingly skewed and in unequal halves. The flowers are very decorative with four 1 to 2cm long, thread-shaped, yellow petals. The fruits grow on woody, two-seeded capsules. It is not clear how Hamamelis became a generic name, possibly from Greek "hama" (= simultaneous) and "melon" (= apple). The epithet virginiana points to the origin of the plant (the US state of Virginia.). The English name "witch hazel" is related to the use of the twigs used for divining for water search.

The dried leaves and dried bark are used. The drug is imported from North America.
A preparation called "witch hazel" is commonly used. It is a steam distillate, for which there are different production requirements. According to the rule of the Pharmacopoeia of the United States (United States Pharmacopeia - USP) 1kg of freshly cut and dried young twigs are macerated with about 2 litres of water for about 24 h, after which the mixture is distilled and 1700ml of distillate is collected, 300ml of alcohol is added and mixed thoroughly, 1 part witch hazel corresponds to 2 parts Hamamelis twigs (DEV 1:2, approx. 15% alcohol content). The E Commission describes a method for a distillate under the name of witch hazel for fresh leaves and twigs collected in spring and early summer (DEV 1:1.12 to 2.08; alcohol content of 6% m/m). In the EgB for the DAB 6 there is a witch hazel (Hamamelis corticis Aqua) made from 1000 parts coarsely powdered dried Hamamelis bark that is left to stand with 2000 parts water and 150 parts alcohol for 24 hours. Then 1000 parts are distilled off, which in effect result in a DEV equivalent of 1:1.

Witch hazel leaves and bark contain tannins; the leaves mostly condensed tannins, (Catechingerbstoffe), the bark predominantly hydrolyzable tannins (gallotannins). Furthermore, volatile matter is sometimes mistaken for an essential oil. Both drugs consist mainly of alkanes in addition to aliphatic alcohols, aldehydes, ketones and esters. It also contains volatile terpenes. Volatile phenylpropanoids occur only in the bark. When the twigs and/or leaves or bark go through distillation, the tannins do not go into the distillate. Thus witch hazel only contains the volatile components of the plant, the component pattern differ with leaves and bark.

For compresses or washing 5 to 10g, for gargles and mouthwashes pour 250ml of boiling water over 2 to 4g of chopped witch hazel leaves or bark and strain after 10 min.

At the most allergic reactions.