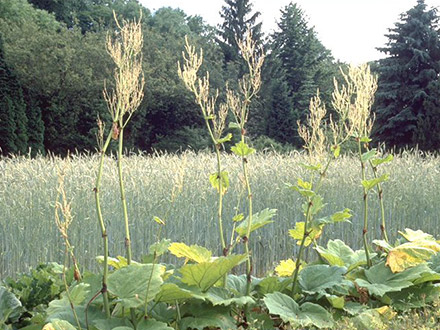 Rhubarb is native to the mountains of Tibet's northeastern and northwestern China, Chinese rhubarb comes from southeast Tibet, southwest China and Burma. It came to Europe with the Arabs via India in the 12th century. We now grow it as an ornamental plant and medicinal herb. In its journey to the west, it bears the Persian name "rêwend" (= rhubarb species), which became "rhêon" in Greek and rheum" in Latin. "Rhâ" is the ancient name of Volga. It is believed that it was either farmed there or exported from Volga. So from the medieval Latin "ra-" connected with the Lat. "barbarus" (= foreign, strange) it became "rhubarb". The epithet palmatum refers to the palm-shaped leaves of the plant, officinalis suggests that this is an old medicinal plant, because the "officina" is the sale room of a pharmacy and officinalis means: used in the pharmacies. The medicinal rhubarb is the garden rhubarb, whose stems are cooked in the form of a compote like to eat, quite similar. Its large leaves are palmately lobed, the upper surface is rough, the petioles are almost round. The leafy scapes rise up 1.50m high with far out over the foliage and bear numerous small pink flowers arranged in flower-rich panicles. Chinese rhubarb has rounded to kidney-shaped leaves, the flowers are greenish. Flowering time is May to June.

The dried underground parts are used. The drug consists of a fleshy root and is often divided and sold freed from the outer cortex, including lateral roots traded. The commercial drug comes from China and India.

Prepared drugs: see package insert;
Tea infusion: 20 to 30mg of anthranoids per day is sufficient for the laxative effect. This is a tea infusion made from 1 to 2g of coarsely powdered rhubarb root. The tea is meant to be taken in the evening before bedtime. It is useful in combination with other drugs such as senna (for a laxative effect) or cumin (flatulence).

Pour 150ml of boiling water over 1 to 2g coarsely powdered rhubarb root and then strain after 5 minutes.

Rhubarb root may not be taken longer than 1 to 2 weeks (gut-irritating laxative), long-term use increases constipation. Rhubarb root should not be taken for intestinal obstruction, appendicitis, inflammatory bowel disorders (e.g. Crohn's disease, ulcerative colitis), abdominal pain of unknown origin and severe dehydration symptoms. A slight discolouration of the urine may occur during the ingestion of rhubarb root. Although at present there are no reports of undesirable or harmful effects with rhubarb root in pregnant women and the foetus, it is advised to avoid the ingestion of rhubarb root during pregnancy because of the potential genotoxic properties of various anthranoids. The transfer of anthranoids into the breast milk cannot be excluded, so that even a dose of rhubarb root during breast-feeding is not recommended. Similarly, children under 12 years old should not take rhubarb root.

Rarely gastrointestinal cramp complaints (reduce dosage!). A prolonged ingestion of rhubarb root (laxative abuse) can lead to problems with the water and electrolyte balance, especially potassium loss. Protein and blood may appear in the urine (proteinuria, hematuria). Chronic use leads to (reversible) pigment deposition in the intestinal mucosa.

Chronic use of rhubarb root (laxative abuse) can increase the impact of digitalis drugs (drugs with cardiac glycosides) by the potassium deficiency, the effect of antiarrhythmic drugs may also be affected. By simultaneous use of thiazide diuretics, adrenal corticosteroids and liquorice root further enhance the loss of potassium.