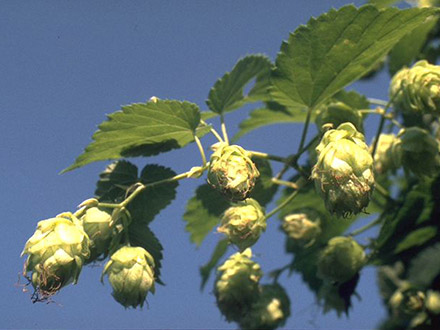 Since the 8th century hops has been grown for brewing beer in Central Europe and is now cultivated in all temperate zones. It gives beer its bitterness. Where it comes from originally is unclear because the prolonged farming has spread far beyond the original area and also there are no fossil deposits. In Germany it is often found growing wild on riverbanks and in riparian forests. The female plant is cultivated, as only the "hops" are used as wort. There are many known cultivars. The genus name Humulus is probably a latinisation of the Germanic name of hop "lupulus", the diminutive form of Latin "lupus" (= wolf), "because the trailing plant brings harm to other plants like the wolf to other animals." Hops is a perennial, twining vine whose shoots grow 6m long in a year, even 12m in farms. The leaves are opposite each other and are usually in 3 to 5 toothed, split long pointed lobes. The plant is dioecious, i.e. plants that have male and female plants with flowers. Typically the female flowers look like cones ("hops") and grow together densely in pseudo-spikes. The cone-shaped appearance is a result of many ovate bracts about 1.5cm long overlapping like "roof tiles". There are two bracteoles in the respective axillas and the inconspicuous flowers are at the bottom of them. The inside of the bracts is covered with small, shiny, pale yellow scales glands (glands of hops). Flowering time is July/August.

The dried female inflorescences (hop cones) are used. The drug comes from southern Germany and the Czech Republic, and imports from the USA and China.

The quality of hops (Lupuli flos) is specified in the European Pharmacopoeia (Ph. Eur.).

For restlessness, anxiety and sleeping disorders (Commission E, ESCOP). The HMPC has classified hops as a traditional herbal medicinal product (see traditional use).

Prepared drugs: see package insert;
Tea infusion: drink a cup of warm hops tea several times a day as a sleep aid half an hour before bedtime. Single dose: 0.5 grams of the drug. Good to combine with other drugs such as valerian root, passion flower herb and lemon balm leaves (sleeping and calming teas).

It is not entirely ruled out that hops impairs one´s driving ability.
An intake of hops during pregnancy and breast-feeding is not recommended because there is as yet no experience on its harmlessness. Likewise there are no findings for use in children and adolescents under 12 years old.