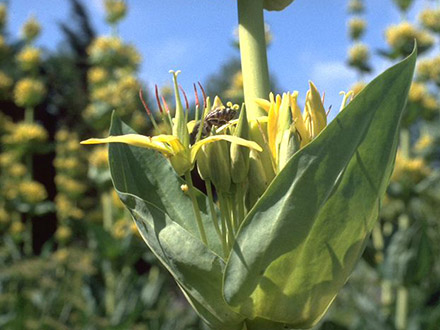 The Yellow Gentian is a central and southern European mountain plant and grows in the foothills of the Alps, also in the Alps, the Jura, the Massif Central, in the Pyrenees and in the Black Forest and the Vosges. It grows in pastures, unfertilised hay meadows, open fields, thickets, landfill sites and cliffs. The genus name of Gentiana comes from King Gent, the last king of the Illyrian Labeats in Shkodra (now Albania), who are said to have recognised the effectiveness of the root of the Yellow Gentian. The artepitheton lutea (Lat "luteus" = yellow) refers to the yellow colour of the blossom. Yellow Gentian grows up to 45 to 140cm high, its main roots can reach a length of up to one metre. The stem is hollow and as thick as a finger, at the bottom it has large elliptic, arched leaves. The yellow flowers have long stalks and bear 3 to 10 flowering cymes in the axils of cup-shaped bracts. The fruit is a pointed cone-shaped capsule, up to 6cm long with numerous seeds. Flowering time is June to August.
"Gentian brandy" comes from the fresh root of the plant. The roots are left to ferment, then dried, chopped and washed with water prepared and fermented again. You can also let the fresh roots ferment directly or mash the fruit. When distilling the brandy, the bitter substances of Gentian do not go in the distillate, however the Gentian roots give the distillate a very distinctive flavour. Alcoholic-aqueous extracts of the roots contain bitter substances and are used to make aperitif drinks (Alpenbitter, Gentian bitters), usually mixed with other plants containing bitter substances. Because of over-harvesting in connection with the manufacture of alcoholic beverages, the stock of Yellow Gentian was under great threat for a time, which led to huge efforts in Bavaria for the cultivation of the plant, which eventually succeeded.

The underground parts are used consisting of rhizome (rootstock) and roots. The drug is collected in the wild in France, Spain and the Balkan countries and farms of France and Germany.

The quality of the Gentian root (Gentiana radix) is specified in the European Pharmacopoeia (Ph. Eur).

For digestive disorders such as loss of appetite, bloating, flatulence (Commission E, ESCOP). The HMPC has classified Gentian root as a traditional herbal medicinal product (see "traditional use").

HMPC has classified Gentian root as a traditional herbal medicine (§ 39a AMG). Based on many years of long with Gentian root, it can be used for light dyspeptic and gastrointestinal symptoms and/or for the temporary loss of appetite.
It is traditionally used to support the digestive function and improve your condition if you feel unwell (traditional use according to § 109a).

Prepared drugs: see package insert;
Tea infusion: drink a cup of warm Gentian tea 3 to 4 times a day, combined with other drugs such as wormwood, yarrow or centaury (stomach teas). To stimulate the appetite drink the tea half an hour before meals, with indigestion drink after meals. Average daily dose: 2 to 4g of the drug.

Pour boiling water over 1 to 2g of finely chopped or coarsely powdered Gentian root and then strain after 5 minutes.

Gentian root should not be taken for existing gastric and duodenal ulcers.
No studies have been made yet on the harmlessness of Gentian root during pregnancy and breast-feeding as well as for use in children and adolescents under the age of 18.