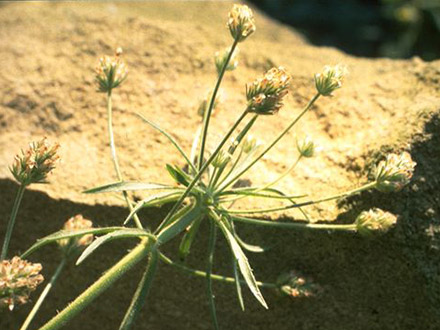 The psyllium-plantain is native to the Mediterranean (southern Europe and northern Africa) and western Asia. The genus name Plantago, derived from Latin "planta" (= foot sole, foot face) with the common suffix of plants "ago" refers in part to the flat, oval leaves of the plantain (P. major) lying closely on the ground in rosettes, on the other hand that the plantain is formed by being trampled by feet. The Psyllium-plantain, however, is characterised by small, very narrow, straight leaves. In the leaf axils of the upper leaves are the scapes with the thick blossom of small flowers in short spikes. The fruit ripens to a capsule with a two-part cover each with two small elliptical, reddish brown, shiny seeds. These are reminiscent of fleas, which has earned the plant the common name "flea herb" or "flea-seed plantain" and the synonymous Latin species name of the plant (P. psyllium) is expressed: Latin, "psyllium" (= flea), which is also kept in the drug name, (Psyllii semen).

The ripe, red-brown seeds are used. The drug comes from crops in France and Spain.

Psyllium contains mucilage in the seed coat, fatty oil in the endosperm.

The quality of psyllium (Psyllii semen) is specified in the European Pharmacopoeia (Ph. Eur). According to the pharmacopoeia even the seeds of Sand-plantain (Plantago indica L.; syn. P. arenaria Waldst et Kit..) may also be used.

No listing as a traditional drug application according to § 109a

25 to 40g psyllium (daily dose) taken in three equal doses with plenty of fluids (very important at least 200ml per dose). Psyllium can be taken already soaked in water, milk or juice. During therapy with psyllium an abundant intake of fluid must be guaranteed in every case.

Psyllium may not be taken in case of suspected intestinal obstruction (ileus), diseases of the oesophagus and difficulty swallowing, and with stenosis of the gastro-intestinal tract. Psyllium should also not be taken immediately before bedtime. The use in children under 6 years old is not recommended due to the lack of findings.

If the increased fluid intake is respected, there are no side effects to expect, at worst flatulence.

Psyllium should be taken ? to 1 hour before or after taking other medicines, as otherwise it may delay the absorption of other drugs from the gastro-intestinal tract.