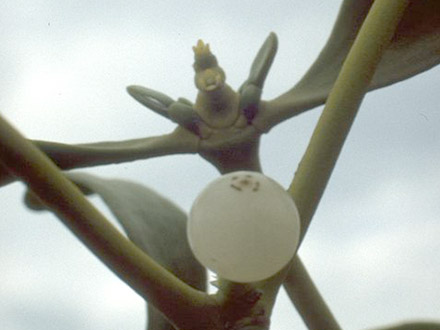 The mistletoe is a semi-parasite, which grows mainly on deciduous trees and spread in the temperate zones of Europe and Asia. As a semi-parasite it lives on trees and cuts off the "host´s" supply of water and nutrients. The mistletoe produces energy-rich organic compounds through the photosynthesis of its own green leaves throughout the year. Thus, the host tree is not permanently damaged by the mistletoe. If the deciduous trees have shed their leaves in autumn, you can see the mistletoe on poplar, birch, willow and other deciduous trees. They are spherical subshrubs with a diameter of about 1m wide, reminiscent of a bird´s nest. Green-brown, dichotomously branched twigs spring from a short trunk. The leaves are leathery, with entire margins, lanceolate to broadly ligulate. At the end of each forked part there is a flower-bearing top. The flowers themselves are rather inconspicuous. What is remarkable are the pea-sized white berries with their slimy sticky content that form from the female flowers. Flowering time is February to May, the berries ripen in late autumn. According to an old custom the green mistletoe with the white berries are attached on the doors of the houses at Christmas time to ward off demons.
The Latin name Viscum album may make reference to the fact, that the so-called bird lime (Latin "viscum"= glue) was formerly made from the white berries. It was used to coat limed twigs and thus began the coveted meal of songbirds, especially the Mistle Thrush (Turdus viscivorus). The berries are eaten by the thrushes, the seeds pass undigested through the bird´s intestine and area disseminated in their droppings.

The dried herb is used consisting of younger branches with leaves, flowers and separated fruits. The drug is imported from the Balkans, Turkey and Russia.

The quality of mistletoe (Visci herba) is specified in the German Pharmacopoeia (DAB).

Segment therapy for degenerative inflammatory joint diseases by producing cuti-visceral reflexes after calming local inflammation through intradermal injections; for palliative therapy in terms of a nonspecific stimulation therapy for malignant tumours (Commission E). These applications were approved by the Commission E for mistletoe; mistletoe stems and mistletoe berries were given negative monographs (unfavourable benefit-risk ratio). The treatment monographs developed by Commission E (phytotherapy), C (anthroposophy) and D (homeopathy) on mistletoe were during the years: 1984 to 1994. Even after this time the mistletoe has been and is well researched; its immune-stimulating anti-cancer effect has been studied, focusing on the mistletoe lectins contained in the mistletoe. They influence the release of cytokines, which act as mediators for important processes of the immune system and so can also be used to fight tumour cells. Cytokines however, have two faces, because they can stimulate the division of tumour cells and thus by improving the immune status accelerate the growth of the tumour. Clinical trials with cancer patients who were treated with a standardised phytotherapeutic with mistletoe lectin content have so far have not shown any remarkable effects. However, there was improvement in the quality of life, appetite, mood and the general condition and performance of the patients. The evidence base has led to the approval of mistletoe injection preparations "for the palliative treatment in terms of a nonspecific stimulation therapy for malignant tumours" (allopathic phytotherapy). Treatment is in the hands of experienced doctors. Another approach is the background of anthroposophical cancer therapy with anthroposophical mistletoe preparations. It goes back to Rudolf Steiner, who introduced the use of mistletoe extracts in cancer therapy in 1921. He declared the special spirituality of anthroposophical mistletoe preparations as part of his metaphysical and esoteric, dogmatic pharmacology was a causal factor in healing. Such preparations are designated in pharmaceutical legislation as "Special treatment directions" and may according to the findings of the Commission C (formerly responsible for anthroposophic medicinal products) be used "for the treatment of malignant and benign tumour diseases, malignant diseases and associated disorders of the blood-forming organs and stimulate bone marrow growth and to prevent tumour recurrence after surgery." This form of treatment can only be performed by trained doctors. The scientific evidence is pending.

Mistletoe is also traditionally used in combination with other drugs to support the cardiovascular function (traditional use acc. to § 109a).

Phytotherapy for the palliative treatment of tumours

2.5g of finely cut mistletoe is doused with cold water, let it stand at room temperature for 10 to 12 hours and then strain.

Cancer therapy using mistletoe preparations for injection if for experienced doctors to decide on, it is not appropriate in the presence of a protein hypersensitivity and chronic-progressive infections (e.g. tuberculosis) and in acute inflammatory diseases and a high fever. Mistletoe must not be used in any form during pregnancy and whilst breast-feeding.

The injection of mistletoe preparations can lead to chills, fevers, headaches, angina, cardiovascular disorders, allergic reactions and inflammatory irritation of the veins, also subcutaneous nodules can form at the point of injection, it can cause swelling of lymph nodes and trigger inflammation and lead to symptoms of increased intracranial pressure with brain and spinal cord tumours.

Mistletoe should not be combined with other immune stimulants.