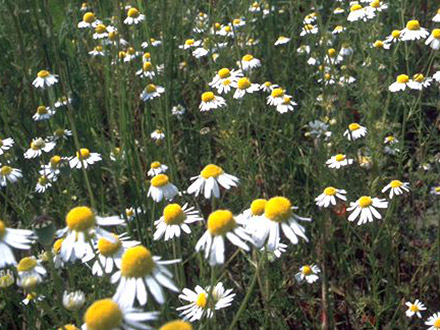 Chamomile is native to Southern and Eastern Europe and the Middle East, but it has now spread throughout Europe, North America and Australia. It is cultivated in Bulgaria, Hungary, Egypt and Argentina, and only to a very limited extent in Germany and Spain. The genus name come from the Latin "matrix" (= uterus; genitive form = matricis) and indicates that the plant has traditional medicinal uses in women's gynaecological complaints. Chamomile grows 20 to 40cm tall with 2 to 3 fold pinnate leaves with long, fine leaflets. The flower heads consist of tubular yellow flowers, which grow on a curved conical receptacle, surrounded by about 15 white ray florets. Whether it really is the True Chamomile can be seen in a longitudinal section through the flower: the flower base must be hollow. Chamomile likes to grow on the sides of roads and fields and blossoms from May to September.

The flowers are used with their typical chamomile scent, which is created by the essential oil it contains. It is in the glandular scales on the surface of the flower and it is released when you rub them. The commercially available drug comes from imports from Hungary, Argentina and Egypt.

Chamomile flowers contain essential oil ("Chamomile oil") and sesquiterpenes (bisabolol, bisabolol oxide) and enyne Dicycloethern. The essential oil is an intense blue colour because of the blue-coloured, volatile chamazulene produced from the nonvolatile Matrizin during the water steam distillation. In addition, it also contains flavonoids, phenolic acids and gums.

Prepared drugs: see package insert;
Tea infusion: drink 1 cup freshly prepared hot chamomile tea 3 to 4 times a day between meals. The tea can also be used for a mouthwash or to gargle. As a bath additive use 50g chamomile flowers for every 10 litres of water. For inhalation, put a handful of chamomile flowers or a few drops of chamomile oil in hot water.

Pour 150ml of hot (not boiling!) water over 1 tablespoon of chamomile flowers (approx. 3g) 5 - let it stand for 10 minutes and then strain.

Chamomile preparations must be avoided with existing allergies to Compositae (Asteraceae).