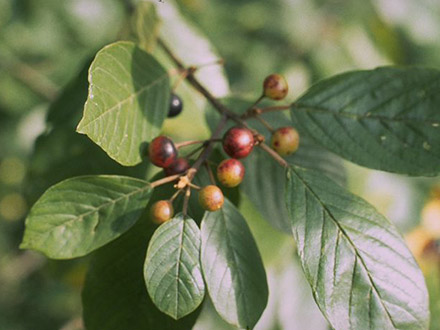 The common buckthorn is native to Europe, West Asia, Asia Minor and the Caucasus, and it grows wild in North America. It grows as a strong shrub or small tree (1-3m high, sometimes higher) from the plane to the lower mountain area, in light deciduous and coniferous forests, preferably at the edges of the woods, also in bushes and hedges along water courses in bushes and on the moors. At 6 to 10m high, the American buckthorn a strong tree that is native to the Pacific coast of North America, from southern Canada to central California, where it is also farmed. The genus name Frangula comes from the Latin "frangere" (= to break) and refers to the brittle nature of the wood of the shrub or tree. The epithet alnus (= alder) clearly draws a similarity of the leaves with those of the alder.
The common buckthorn is characterised by horizontally projecting branches. Its bark is green when young, later it is grey-brown and is clearly characterised by distinct, diagonally arranged, grey-white lenticels. Even the bark of the American buckthorn has these clear lenticels. The leaves of both species are similar, they are stiff, elliptic to obovate and entire. The flowers of the common buckthorn are inconspicuous, greenish white, the American buckthorn flowers are white. They are in axillary cymes with 2 to 10 flowers each. After fertilisation, they mature into berry-like drupes that change colour during ripening from green to red and finally black. The flowering period is May / June.

The dried whole or ground bark of the trunks and branches of both species are used. The bark of the common buckthorn (alder bark) comes from the wild or from cultivations in riparian forests in Eastern Europe, mainly in Poland. After the harvest in early summer, the fresh bark must be stored for one year or dried in a hot air stream at 80 - 100°C (see ingredients). The bark of the American Buckthorn (Cascara bark) comes from farms in the U.S. states of Washington and Oregon, and from western Canada.

Buckthorn bark (from the common buckthorn) contains anthranoids (hydroxyanthracene derivatives, "anthraquinones"), and mainly glucofrangulin and frangulin. They are formed by oxidation during storage or when being dried in a hot air stream from the corresponding anthraquinone glycosides. Cascara bark (from the American Buckthorn) also contains anthranoids, mainly cascaroside, along with aloin.

No listing as a traditional medical product (§ 109a)

Prepared drugs: see package insert;
Tea infusion: 20 to 30mg of anthranoids per day is sufficient for the laxative effect. This is attained with a tea infusion of 0.5g of Buckthorn bark or Cascara bark. The tea should be taken in the evening before bedtime. It is useful to combine it with other drugs such as Senna leaves (which has a laxative effect too) or Cumin (for flatulence).

Pour 150ml of boiling water over 2 cups of finely chopped Buckthorn bark or Cascara bark and strain after 10 to 15 minutes.

The chronic use of Buckthorn bark or Cascara bark (laxative abuse) can increase the impact of digitalis drugs (drugs with cardiac glycosides) due to the potassium deficiency, the effect of antiarrhythmic drugs may also be affected. The concomitant use of thiazide diuretics, adrenal corticosteroids and liquorice root can further enhance the loss of potassium.