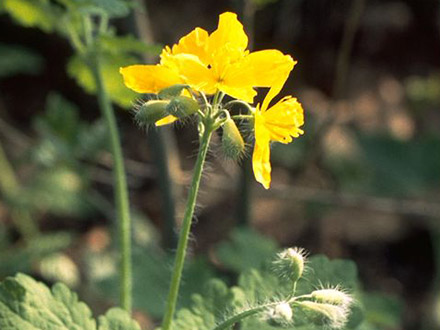 Chelidonium majus is the only species of the genus Chelidonium. It is native from the subarctic to Mediterranean Europe and also grows in the temperate and subarctic regions of Asia. Celandine was probably introduced in North America. It is a typical ruderal plant, i.e. it grows in areas influenced by the presence of people, such as refuse, garbage and waste yards, on path and roadsides and in hedges, walls, fences, in fields and pastures. Because the seeds are easily stuck to ants with their sweet sticky seed appendage (elaiosome), it is found frequently in wall crevices. The genus name comes from the Greek Chelidonium "chelidon" (= swallow), but is not entirely clear how this is interpreted. Theophrastus, the Greek philosopher and scientist, associates with the observation that the plant begins to bloom with the arrival of the swallows and it withers with their departure. That may be true in Greece, where the celandine certainly flowers earlier than here where it blooms after the arrival of the swallows, but typically the entire summer from May to September. What is very characteristic of the plant is that are already still yellow flowers next to mature pods on a wilting plant. Its acrid juice has been used successfully in restoring the eyesight, a property which Pliny tells us was discovered by swallows. The English name is a linguistic transformation of the Latin name, originally "celandine" (from Chelidonium). Celandine is a 30 to 60cm tall perennial with hairy branched and spreading stems. On them are sinuate-pinnate leaves, pale green on top, and blue-green frosting underneath. The flowers consist of four bright yellow petals and numerous stamens. Out of the ovary grow about 5cm long, narrow pods with many small black seeds that carry the above mentioned off-white, sweet and sticky appendage (elaiosome), with which the seeds are easily spread far and wide by animals. In all parts of the plant there is an orange juice milk, which is released when the plant is broken, even when picked, and stains the fingers yellow. The colour is caused by carotenoids and some alkaloids in the latex, in particular by sanguinarine (Lat sanguis = blood).

The quality of celandine herb (Herba Chelidonii) is specified in the European Pharmacopoeia. (Ph. Eur.).

Celandine has no listing as a traditional medicine (§ 109a).

Prepared drugs: see package insert;
Tea infusion: The application of celandine herb as a tea infusion is discouraged because of the possible side effects.

Celandine should not be taken with an existing liver complaint or a history of the disease. Likewise, it should not be taken for gallstones or if the bile ducts are closed, at least not at a dose of 2.5mg of alkaloids. Celandine cannot be recommended during pregnancy, breast-feeding or for children under 12 years old because there is no experience on its safety.

Reports of increased liver enzyme activity in serum bilirubin and jaundice have put the application of celandine temporarily in question. However, the results of any inquiry link this side effect to a high alkaloid daily dose (15 to 25mg alkaloids). Also, too high a dose of the alkaloids sanguinarine and chelerythrine, which occur mainly in the roots could also be held responsible. It was also found that in the said cases, the celandine preparations were incorrectly applied during acute liver and biliary inflammation. After discontinuing the use of celandine, the values decreased. Today it is estimated that no side effects are expected with a total alkaloid daily dose of max. 2.5mg.