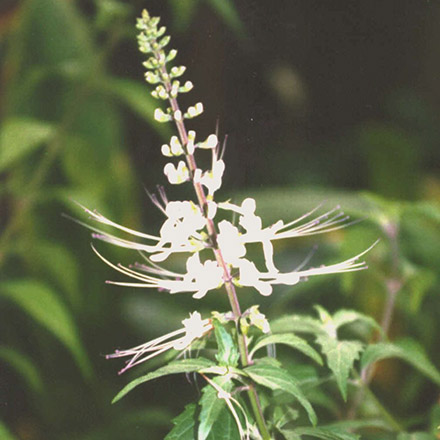 The Cat's whiskers is native to tropical areas of Asia and has spread to the East Indies, Indochina and Indonesia. It is also cultivated in Java and Sumatra. The plant owes its name to the four strikingly long stamens, which stick out, as long as a pen, looking like a cat's whiskers sticking out from the white to pale purple flowers lip. The flowers are in spike-like flowery whorls, which is expressed by the epithet: Lat "aristatus" (= with ears). The genus name Orthosiphon comes from the Greek and means "upright tube." The perennial, herbaceous plants will grow up to 60 inches and has purple, four-sided stems that are coarsely toothed with pointed leaves, arranged in decussate.

The dried leaves and twigs are used. The drug is imported from Indonesia. In the trade the drug is also known as "Indian kidney tea" or "Java tea".

The quality of Orthosiphon leaves (Orthosiphonis folium) is specified in the European Pharmacopoeia (Ph. Eur.).

Orthosiphon leaves are categorised by the HMPC as a traditional herbal medicine (§ 39a AMG). Based on many years of experience Orthosiphon leaves can therefore be used to increase urine output and for flushing the urinary bladder in a supportive way with mild symptoms.
Traditionally used to support the excretory function of the kidneys (traditional use acc. to § 109a).

Pour 150ml of boiling water over 2 to 3g finely chopped Orthosiphon leaves and strain after 10 to 15 minutes.

Plenty of fluids must be drunk with a flushing therapy! A flushing therapy with Orthosiphon leaves must not be performed in the presence of oedema due to impaired heart and kidney function. Seek medical advice if during the treatment the following adverse effects occur: fever, urinary retention, seizures during urination or blood in urine.
There are no studies on the safety ingesting Orthosiphon leaves during pregnancy and whilst breast-feeding, and for use in young people under 18 years old and children.