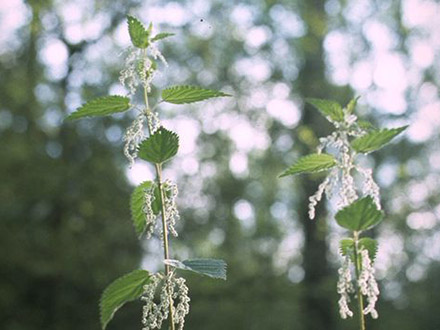 The stinging nettle is a cosmopolitan ruderal plant, because it can be found in all temperate zones of Europe, Asia and America, and settles in typical ruderal locations. As such, it grows in human-influenced locations such as waste, rubbish and farmyards, path and roadsides and hedgerows, walls, fences, fields and pastures. These are mostly nutrient-rich soils. The stinging nettle is well known to all people due to their painful burning sensation when you touch the plant. This is caused by stinging hairs on the leaves and stems. Even the slightest touch breaks off their little tips, the broken tip then forms a sharp edge, which pierces the stinging hair into the skin. When under high pressure, the cell sap containing formic acid, acetylcholine and histamine is injected as with a needle under the skin where it causes an itchy rash. This characteristic is reflected in the Latin and German names of the plant. Urtica comes from the Latin "urere" (= to burn), further boosted by "urens" of the Lesser Nettle (U. urens). In English, this "burning" sensation is combined with "nettle" to give its name: stinging nettle. This refers to the use of nettles as a domestic "spun plant" (fibre plant), because before the introduction of cotton in Europe, the sclerenchyma fibres of the nettle stalks were spun into cloth. Nowadays, unbleached cotton is produced from cotton yarn.
Both types of stinging nettle are used medicinally. The perennial stinging nettle (U. dioica) can grow up to 150cm high, the angular stems are covered with stinging hairs and bristles. The serrated leaves are covered in decussate stinging hairs and bristles, they are heart-shaped at the base and taper off sharply. The small inconspicuous flowers are arranged in panicle inflorescences (thyrsi), the plant is unisexual (dioecious - dioica), i.e. that are both male and female flowers are on separate plants. The annual Lesser Nettle (U. urens) is 10 to 50cm significantly smaller, and its rounded leaves are small and only bear stinging hairs, no bristles. The flowers are yellowish and more delicate than those of the Greater Nettle, also, the plant is monoecious. They flower from May to October in both species.

The dried herb (leaves and stems) of both types are used or just the dried leaves and roots. The commercial drug comes from wild resources in Central and Eastern Europe.

Stinging nettle root
Urination problems in prostatic adenoma stage I to II of benign prostatic hyperplasia (Commission E, ESCOP); ESCOP defines the symptoms more accurately: with night-time urge to urinate, upset in the emptying of the bladder with postvoid residual urine, with painful and difficulties in urinating as well as urinary retention.

Stinging nettle root
Traditionally used to help the excretory function of the kidney (traditional use acc. to § 109a).

Prepared drugs: see packaging leaflet.
Tea infusion: drink a cup of nettle tea (stinging nettle herb tea) 3 to 4 times a day, average daily dose 10 to 20 grams of the drug. There are useful combinations with others drugs, such as True Goldenrod, Restharrow, Orthosiphon leaves or Birch leaves (Bladder and Kidney tea, Urinary tea).
To ensure the effect of stinging nettle root for the treatment of benign prostatic hyperplasia (BPH), it is advised to use this form of finished drug as per the advised dosage in the package leaflet.

Pour 150ml of boiling water over 4 teaspoons (about 2.8g) of finely chopped stinging nettle leaves (nettle herb) and strain after 10 to 15 minutes. The tea infusion with nettle root must be prepared with the coarse powdered drug, 1.5g of drug mixed with 150ml of cold water, bring the mixture to a boil, keep it at the boil for 1 min, then remove from the hob and strain after 10 min.